The hole in your bucket – by Andró Griessel

Have we got it all wrong? – by Andró Griessel 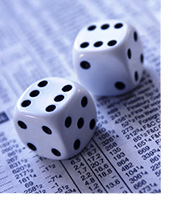 Before I get to the content of this issue of 2Cents, I want to quote a few wise words by Warren Buffet, because what I will try to get at in a hap hazardous way, Mr Buffet is able to effortlessly pinpoint in a few sentences.

If you are someone with an interest in financial markets you would have undoubtedly noticed the following rates of return (for the period ending 31/3/2014) in the section for General Equity funds. Below figures are from Morningstar for the period ended 31/3/2014.

Anyone looking at these figures would be excused for thinking that to invest in equities is as easy as pie and that at any time is a good time to get involved OR if you are already an investor, that it would simply continue like this for the next 10 years.  1 and 3 years are really very short term figures, but when 5 and 10 year figures look that attractive, surely you must be an idiot NOT to be heavily invested in this asset class right?

I want to argue (now even more than in 2011), that these figures paint a deceiving picture and should be completely ignored when investment decisions are made for the future. Except for the fact that most of these long term returns have starting points where the market was cheap (2004 for the last 10 year figures, 2009 for the last 5 years), the last 3 years’ return, as I will illustrate later, might not be with us much longer. To make an investment, based on historical performance as your motivation, is just as meaningful as trying to drive forwards while looking only in your rear view mirror.  An accident is practically guaranteed.  The only uncertainty lies in WHEN it is going to happen.

In February 2011 (2 Cents Vol 79: Why local might not be so lekker) I wrote about the local market, how it seemed expensive and that I thought that Investors would do well to look at alternative asset classes (such as offshore equity) to invest in.  Turn the clock to 3 years later and the JSE, despite a momentary slump, is up with a further 49%!  It is similar to the Cinderella party that lasts until 3 o’clock with no one changing into a pumpkin at midnight.  The only guy that looks like a pumpkin now is the one who said in 2011 that the local market looked expensive.  I cannot help to think back to 2005 when property prices reached nonsensical levels (See 2 Cents Vol: 31: Wolf wolf), but for another 2 years continued to rise only to go up in smoke and leave investors with 5 years of Zero returns.  Someone once said: “In financial markets: being early is undistinguishable from being wrong”.  I might be wrong, but I suspect that this is going to be a similar situation.

Just to refresh your memory and to emphasize why I think there is a disillusionment awaiting people who think that local equity is a one-way bet, I will illustrate the rates of return that was achieved over the last 23.5 years given certain starting points (from a valuation point of view).  We know by now that the price and value of listed equities are almost never the same.  The price constantly oscillates around the real value of the underlying assets and is at times very over-optimistic (high price levels) and other times very over-pessimistic (low price levels). The data below indicates (in green), where an overly pessimistic market moves to an overly optimistic market and (in red) where the opposite happens; the market moves from being over-optimistic to over-pessimistic.  Period A is from October 1990 and then 7 identifiable cycles follow until we get to the current cycle that started somewhere around March 2010 (in my view) and still continues today. As a benchmark for cheap, I used the JSE Earnings Yield (E/Y) at 10% or more, and as a benchmark for expensive, I used an Earnings Yield (E/Y) of 6% or lower. 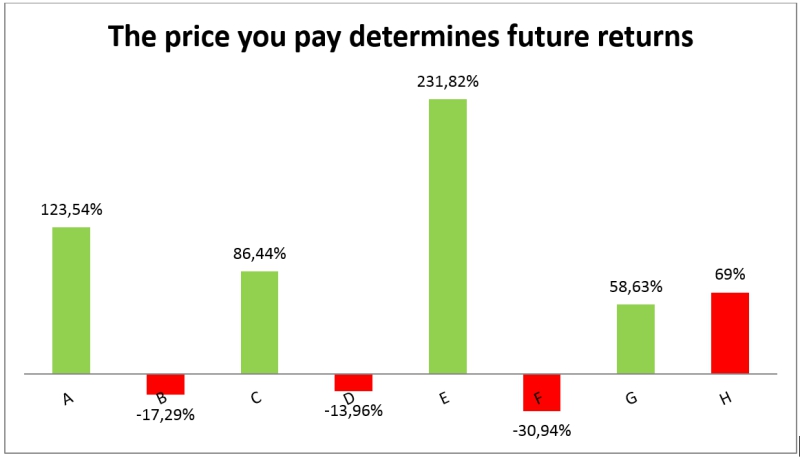 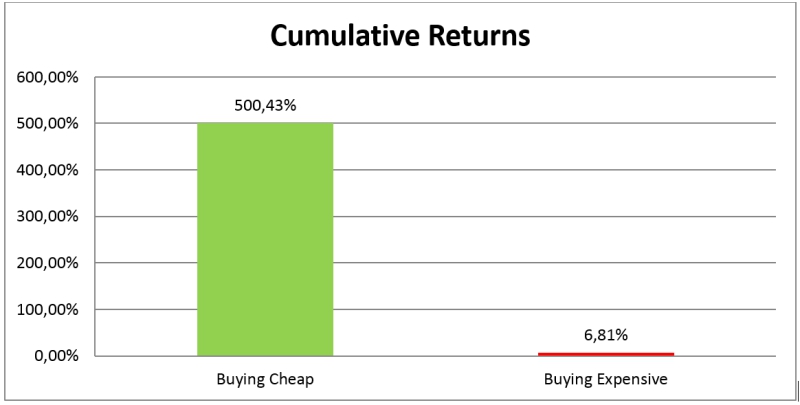 We can conclude the following from the above:

b)   If you would have invested in the JSE when shares were expensive (Earnings Yield of 6% or lower) and kept that position until shares became cheap (Earnings Yield of 10% or higher), you would have achieved a cumulative return over the periods (B, D, F & H) of only about 7%. For about half of the time (more than 11 years) you would not have earned any return from equity…and this is INCLUSIVE of period H’s positive 69%.

c)   Thus far, period H (the one we are currently in) is in conflict with the analysis and norm that when prices are high, future returns are low. Even though the earnings yield dropped below 6% in 2010 and have not appeared to be cheap since, the total return over the period has already been 69% (while it was negative over all the other overvalued periods). So why would period H be different?  In financial markets, when we hear the phrase “this time is different”, it is usually time to run for cover.

Is the above an attempt to “time” the market, or do I believe that anyone can do it with a great degree of success? …not at all.  Sensible asset allocation, i.e. the process where a greater portion of your total investments is allocated to undervalued assets and a smaller portion, or none at all, is allocated to overvalued assets, is of a crucial part of the investment process.

With the above I am also not trying to say that the ENTIRE local market is overvalued and due for a correction, but that certain segments, specifically the Industrial sector, appears expensive and that return expectations from this part of the market will have to be significantly more modest than what investors has grown accustomed to.  See below graph in conclusion. 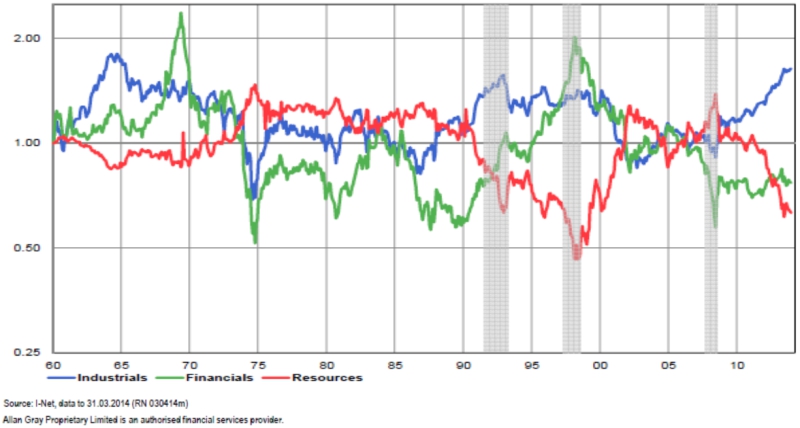 The graph above illustrate that it is not only asset classes that become cheap and expensive in cycles, but also sectors within a certain asset class.  The graph shows relative valuations among the Industrial sector (Blue), Financial Sector (Green), and Resources sector (Red).  Just to emphasize one last time the principle that current valuation dictates future returns, I want to look at the period between the grey strips between 1998 and 2008.  You will notice that Financial shares were relatively expensive compared to Resources in 1998.  In the following 10 years, the valuation gap diminished and eventually reversed until Resources shares were relatively expensive compared to financial shares in 2008.  Over the 10 year period from 22/4/1998 to 22/4/2008, the Financial sector DECREASED with about 9% while the Resources sector INCREASED with almost 700%.  Currently there seems to be an inverse relationship between Resources and financial shares on the one hand, and Industrial shares on the other hand.

What does this all mean for you and how should you approach your investment decisions from here onwards?

As usual, we welcome any comments, feedback or questions.

Please contact the author (Andró Griessel) if you have any questions or comments on this month’s 2Cents.

Disclaimer: Although all possible care was taken in the drafting of this document, the factual correctness of the information contained herein cannot be guaranteed. This document does not constitute advice and anyone planning on taking any financial action based on this document, is strongly advised to first consult with their personal financial advisor. ProVérte Wealth Management is an authorised financial service provider with FSP no. 5966.