Most people, except maybe Donald Trump, couldn’t wait to see the end of 2016. It was one of those years that really didn’t go well. There is an interesting representation of investments that awaits as I dust the beach sand off my feet to put on my working shoes to start the new year. I always look forward to scrutinize the so-called “smartie box”, updated with the latest information from the previous year. It is a graphic illustration of the performance of the various asset classes over the last decade, measured over a 1-year period. Refer to the graph below. The green areas indicate the best performing asset class during a specific year and the red areas indicate the worst. 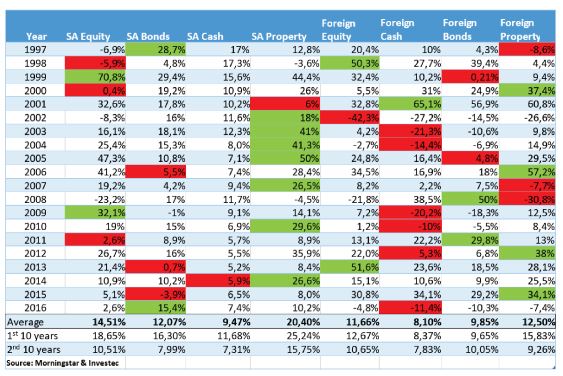 If you struggle to find a decisive pattern by looking at the graph above, don’t feel alone, there probably isn’t, but I do however want to share the following considerations:

– Note the dramatic decrease in the performance of South African assets from the first to the last decade. It is interesting to point out that if you didn’t have a big exposure to local properties, your return would have been rather dire. You would hardly have achieved a return of 10% per annum, irrespective of which other local asset classes you selected.

The article that I wrote a few months ago, entitled, “You can drown in water that is 3 cm deep on average” is also relevant after studying the “smartie box”. If you select your asset allocation for the last 10 years purely based on the average returns of the asset classes during the previous 10 years, i.e. 1997 – 2006, you would have been hugely disappointed with the outcome. I want to “throw it out there” that return expectations of SA assets is still far too optimistic compared to their historic returns, even if you consider the last (relatively) poor performing 10 years.

– Be particularly aware of the decreasing trend of cash since 1997. The rate decreased from 17% back then to only 7.40% today. This decreasing interest cycle was predominantly positive for the assets that pays out a (usually fixed) income stream, like bonds and property. The (positive) effect on these assets’ prices is particularly large during a very rapid downward cycle and eases as the cycle nears its bottom. A rapid increase in interest rates would therefore have to be one of the factors that triggers the exceptional returns for these asset classes over the next decade. Unfortunately, this is highly unlikely in my opinion.

– The reactive behaviour of investors and how this should be avoided is often discussed in financial literature. If you look at the returns of offshore assets during 2015, you would have been forgiven if this was your top pick during 2016. The Nenegate debacle was fresh in our minds and people literally rushed to transfer their funds to the safe (offshore) haven. The rapid devaluation in December 2015 was completely overturned during 2016 and several investors suffered huge losses when they subsequently brought these funds back in the second half of this year.

– If you purely look at returns over the last 20 years, offshore cash just doesn’t seem to look like an investible option for South Africans. Besides the volatility, it is also the worst performing asset class. In the absence of rising global interest rates, these characteristics are most probably going to continue. When you analyse the correlation, i.e. the degree to which different assets move in the same direction (either up or down) over the past 20 years, the following is quite interesting.

– There is a much bigger correlation between property and shares than between property and bonds. Textbooks indicate the latter and usually recommends that property should be valued along the yield curve of bonds. If you therefore interpret the evidence of the last 20 years as anything to go by, and want to construct a low correlation portfolio, a combination of shares and bonds would probably lead to an effective combination.

– Offshore bonds and cash have a 95% correlation. You would gain very little in terms of diversification if you include these two assets in your portfolio.

– No correlation exists between local cash and offshore equities. You will therefore achieve suitable diversification qualities if you combine these assets into a portfolio.

All the best with the year ahead and specifically with the construction of your investment portfolio. There are times when making investment decisions are easy, 2017 is probably not going to be one of those years.

*Andró Griessel is a certified financial planner and the managing director of ProVérte Wealth & Risk Management. Follow him on Twitter @Andro720911. He writes twice a month for Sake24

Although all possible care was taken in the drafting of this document, the factual correctness of the information contained herein cannot be guaranteed. This document does not constitute advice and anyone planning on taking any financial action based on this document, is strongly advised to first consult with their personal financial advisor. ProVérte Wealth Management & Risk Management is an authorised financial service provider with FSP no. 5966.