Knysna-fires: What if it happened to you?

What is the recipe for success?

Bubbles: The price you pay matters

Bubbles: The price you pay matters

In a newsletter to clients on 6 December 2005 I wrote the following: “I am starting to feel like the little boy who cried wolf! In 2 Cents Volume 22 (early in 2005) I was already cautioning people against the apparent senselessness going around in the property market at the time and warned them to carefully consider whether they still want to be involved in specifically the residential property market. Almost a year later and the market is only just starting to cool down and with that, I do not mean extended growth but rather that prices are actually starting to come down.”

The problem with investments is that often when it “feels right” it probably is not and vice versa. Back in 2005 you could not convince anyone that buying residential property at astronomical prices was not a good idea. The argument was that prices would simply keep going up and you would hear numerous theories as to why this would be the case.

I recently got my hands on buy and sell data of 2 units in the most popular seafront apartment buildings in Strand for the period between 2005 and 2017. Statistically this is not necessarily the best sample of the residential market of the country but I have a strong feeling that you will see the same trend if you look at other residential buy and sell data over the same period. So what did these investors achieve over the period? I share the following statistics and then make some additional conclusions which will hopefully help you with future decision making.

Additional things to keep in mind:

– There are no duties, transfer fees or commission on sales nor any spending on maintenance or repairs considered with the above calculations. 85% of the above 52 investors would have lost money in real terms with regard to capital growth.

– No rental income was taken into account either. Therefore, investors who bought the property to rent it out would have done better for themselves, although, even with a net return of 6% this would not have been a meaningful investment.

– There was one investor who made a return equivalent to 150.67% (before costs) per year by buying the unit for R 2.11 million in July 2006 and then selling it for R 2.7 million 3 months later. After transfer costs and commissions this would have been noticeably lower.

– Not one of these properties that were bought in 2007 (at the peak), can be sold for more today. That translates to a decade of no, or negative growth. A specific property that was registered on 22 November 2007 with a selling price (without costs) of R 5.7 million would not even fetch the same selling price today in my opinion, that is before any costs or commissions has been taken into account.

– An investment in the most popular (not best performing) balanced fund would (after fees) be worth R 13.7 million today.

– 8 Investors could make more than 10% per year on capital sold. This is because of one of three reasons: (1) they bought and sold before 2007 (2) the person who bought the property did so from someone selling at a loss (3) the transaction only happened after 2013 when prices slowly started to come down.

– A graph of return (y-axis) and number of years the property was owned (x-axis) is also interesting. For clarity, I removed the outlier of 150.67%. Please see graph below: 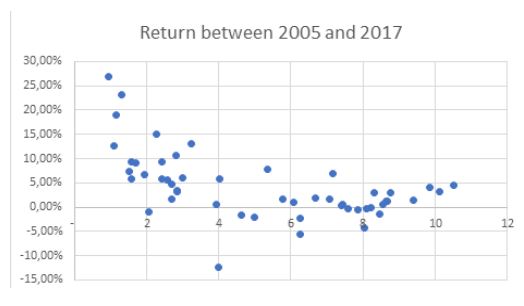 Investors who achieved a return higher than 15% on capital all owned the properties for less than 3 years. Although the sample is small this would suggest that buying and selling within 3 years would be a better strategy than to buy and hold for the long term. What you should keep in mind is that once you start buying and selling, income tax will come into effect instead of capital gains tax which can cancel out a lot of the benefit. Also remember that commission (payable by the seller) will also influence the return on short term transactions.

In conclusion, a couple of thoughts:

– The goal of this article is not to criticize property as an asset class. We see property as a very important asset class. The principle of overpaying for something because it becomes popular is universal (whether it is shares, property or art) and so is the risk of destroying capital over the long run. What I would like to warn against at this point is the apparent defiance of investment principles that is once again appearing in Cape Town city center especially where people are paying north of R 60,000 per square meter for tiny units with hopes of renting it out on AirBNB or that someone else will be willing to buy it at R 120,000 per square meter in 5 years.

– When you pay too much for property or any other asset and you make use of financing, the negative impact on capital is even bigger. If cashflow later becomes a problem you can sit with huge losses on your hands as well as a lawsuit from the bank you owe the money to. Do not put yourself in this situation.

– The decision about what to do with your hard-earned capital is an important one and mistakes can have an astronomical impact on your wealth. If you do not have the skill to evaluate value for money yourself, get help from someone who possesses this skill.