In the first article that I wrote on inheritance by means of a comprehensive life policy (Click here to read more), I argued that people should think outside of the box, as it might be risky not to. Today I’ll try to explain what you might encounter outside of the box…

Let me start by saying that in my opinion the first prize is to manage the farm exactly like any other company would do. Many corporate farmers already do it this way.

The business and profits belong to all shareholders (in this case the family) and not to a chosen one or two according to gender or order of birth.

Farming must be managed like any other company and for that you’ll need people to do the job. For this you must compensate them in accordance with their obligations, contributions and initiatives. These people can be from the ranks of the family or not.

If this route is followed, big pay-outs from life insurance for daughters or sons who do not farm is unnecessary, because they will share in the profits (if any).

If the farm is sold, they’ll also share the profit equally. If you don’t want co-shareholders you are free to buy them out, but this will also come at a fair price.

The idea that one or two of the children inherits a big asset in life without having to pay, while the other children must possibly wait 30 years for an uncertain legacy, is as obsolete as public executions.

I accept that this solution would however demand a significant mind shift for most people and it’s wishful to think that everyone would contemplate incorporating this strategy into their planning.

Let’s therefore look at alternative ways to deal with inheritance, if the other heirs (who does not inherit the farm) must be compensated.

Determine what is fair

Think carefully about what is fair towards all three parties: father, son(s) who farms and other heirs.

Is it fair to compensate the remaining children by means of a life policy that will be paid out in the distant future?

And what should the amount be?

In my experience people don’t think clearly enough about this and it’s often the result of what the testator (at that stage) thinks is affordable to pay for life insurance.

However, it is a very dangerous strategy, as I’ve mentioned in my previous article, because what’s affordable today often becomes unaffordable in the future and the plan has no adaptability without financial losses.

Is the most recent price per hectare for land sold in that area a meaningful valuation measure? I don’t believe so. This only becomes relevant in a situation where land is actually sold.

In most of the cases the idea is that the son farms for the next 20 or 30 years and then passes it on to the next generation. A discounted-cashflow calculation is probably a reasonable measure, because farms generally get a very low return on employed capital.

It is unrealistic to expect the remaining heirs to inherit an amount equal in value of the value of the land and machinery.

This method of calculation of course also has its shortcomings (because your assumptions should be made for the distant future), but it’s essentially a better alternative than thumb sucking – what most resort to currently.

I would like to illustrate this by means of an example that fits in with the policy solution that I referred to in the previous article. The assumptions and calculation of the value of the son’s inheritance according to the discounted-cashflow model follow below:

The discount rate is very important. The riskier the business (in this case a farm) and the more uncertain the future profits are, the higher your discount rate should to be. You can probably make out a case for a larger discount rate which will decrease the “value” considerably.

Rather invest on behalf of the heirs

Instead of taking out a policy, make an investment in favour of the heir(s).

Once a fair amount is calculated, invest amounts (lump sum and/or monthly) to place the heirs in a position where they’ll have a similar investment at retirement.

If it involves a 7% inflation escalation as in the policy example, that would mean that the heir must get R139,4 million when he is 65 (to inherit the purchasing power of R16 million today).

To do this, the son who farms should make an investment (that grows at 11%) of R30 128 per month (against the policy’s R17 516), but which escalates annually with 6% instead of the giant escalations of the policy.

In this example the policy premium will exceed the premium of the investment within seven years and thereafter the impact on cash flow increases dramatically. Refer to the graph below. 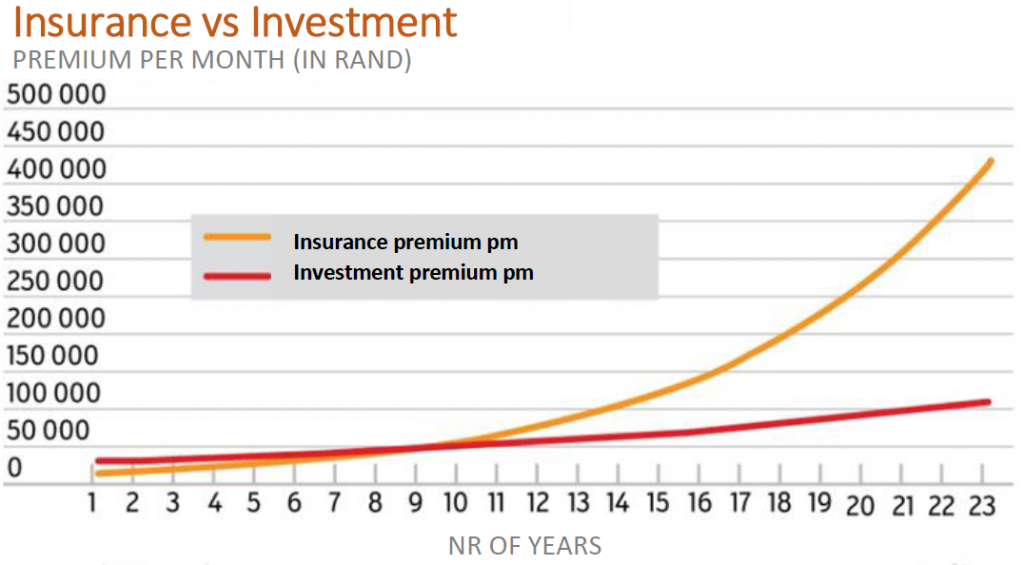 Adjust the plan according to the circumstances

Because there’s no contractual obligation to pay a specific premium for an indefinite period, there is space for adjustment.

For example, the son can pay down sooner if this was possible or he could take a payment holiday for a year if there was simply no other way.

If the farm is sold you would have easily applied the principle of fairness compared to insurance.

In an extreme case of something like land reform, the money which accumulated (preferably in a trust) could be fairly applied again.

This plan isn’t perfect, but like my deceased father used to say, it’s a “damn sight” better than the policy plan.

I still prefer the approach to manage a farm like a business, but in the absence of that structure, this is in my opinion a much better strategy than life insurance.

In short, this is why I say so:

This isn’t a case of one solution fits all. Each case must be evaluated on its own merit. You will however be well rewarded if you put a bit more thought into the process.