Currency weakness: Is there lessons to learn from the past?

Currency weakness: Is there lessons to learn from the past?

At the time of writing this article the Rand is trading at about R 14.90 against the US Dollar. Only 2 weeks ago it was trading at R 15.40, the worst level in almost 2 years. This depreciation led to the customary emotional outcries and our lines were ringing with concerned clients wanting to confirm that their offshore exposure is adequate and whether it shouldn’t be increased. Some clients also, with a lot more certainty than 3 months ago, prophesied a downward spiral in our currency. Isn’t this what supporters said of the Springboks, i.e. that they will NEVER beat the All Blacks again?

With the gift of hindsight to my disposal, I had a look at the most extreme periods of de-valuation of the Rand since 1992, shown in the graph below.  For a period to be included in the graph the rand had to depreciate by more than 20% in less than 12 months. Our currency is too volatile to include periods where it has decreased by more than 10% (if happens frequently).  By the way, when we talk about a depreciation of the rand of 20%, we actually mean that the Dollar has APPRECIATED by 20%, it sounds like the same thing, but isn’t.  If the Rand depreciated by 100% against the Dollar, it would mean that the Rand is worth Zero, but if the Dollar appreciated with 100% against the Rand (which happened in 2000/2001), it only means that I must have twice as much Rands to buy one Dollar. 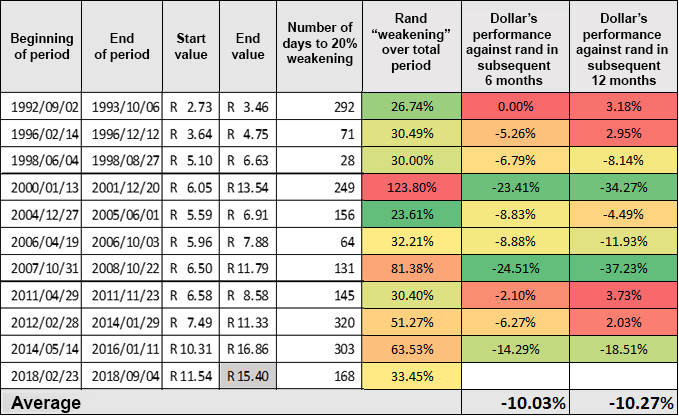 There are a few things that stands out from the table above:

Before I give you insight into what I think this currency weakness means for you as the investor, let me just be clear that I DON’T know if we have reached the end of this downward cycle and that nothing in investments are ever CERTAIN.  If we however take note from what happened in the past, the following points is something to consider:

When making investments decision remember that when a decision feels to easy or obvious it is usually incorrect!