How not to make money

Buy & hold (in a balanced portfolio) remains your best bet

How can you tell if a specific fund manager is successful or follows a process that delivers results?

Is one year of significant returns proof enough, or at least three? Or does it have to be as long as 10 years?  And if you choose someone today who has an exceptional 10-year track record, would that guarantee your chances of great performance for the next 10 years?

I would assume that any sensible person in 2009 would NOT have looked for the WORST performing funds over the previous 10 years (since 1999) and opt to invest in them.

Most people would’ve invested in the funds with the best 10-year performance, giving both the adviser and client peace of mind that they are basing their decision on a decade of notable performance instead of recent short-term outperformance. 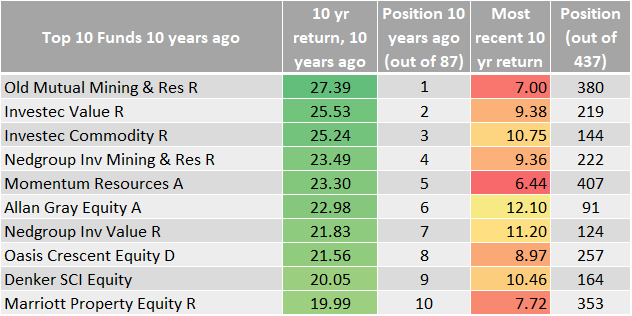 We can therefore not assume that a fund with a decent 10-year track record relative to other funds will continue to outperform the other funds. On the contrary, the evidence suggests that the fund will actually underperform.

To further illustrate this point, I compared the performance of the previous decade’s bottom 10 performers with that of the last decade.

The reversal of results for certain funds are remarkable.

For example, the Old Mutual offshore equity fund had an annual growth of only 2.33% in the previous decade but after the last decade it’s the number one fund out of 437 funds with a 19.72% growth per annum. 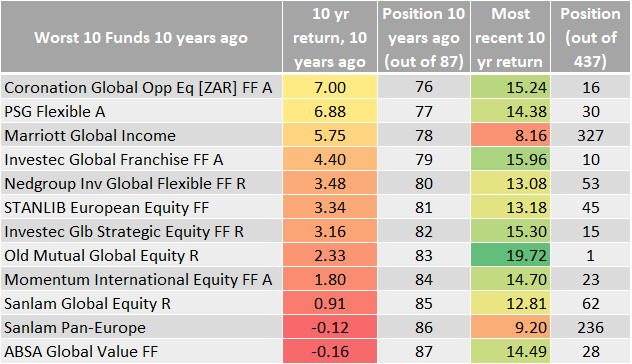 It is understandable and advisable not to look at short-term fund performance (like 1 or even 3 years), but it begs the question; what information should I use to base my decision on when selecting a fund manager to manage my hard-earned money?

Like most things in life it’s easier to tell you what NOT do, than what you should do.

Extremely high or low valuations in commodity prices, excessively high or low interest rates or exchange rates can all return to normal which can have a significant impact on exposed funds. These economic cycles can also take a very long time. Funds with more manoeuvrability in their asset allocation mandate is likely to achieve a better outcome for investors, especially when investor behaviour adjustments are made.

Both of the above supports a buy and hold strategy (assuming a balanced portfolio that is not exposed to single stock risks).

Therefore; take any historical fund performance data with more than a pinch of salt.  The process of making effective asset allocation decisions is unfortunately more complex than simply selecting funds with positive historical growth, even if it achieved great returns over a relatively long term.

Andró Griessel is a certified financial planner and managing director of ProVérte Wealth & Risk Management. Contact him at info@proverte.co.za.