Take it easy for now

Take it easy for now

However, the current market could be a good entry point if you are able to invest

Governments’ measures to curb Covid-19 (and not Covid-19 itself) was the spark in the barrel that caused the fourth market crash in the last 22 years.

Some terminology: A bear market is usually classified as a 20% decline from its peak, while anything more than a 30% drop is described as a crash.

Below, I compare the current market conditions with the previous three crashes – in 1998, 2002 and 2008 – and highlight some important points. 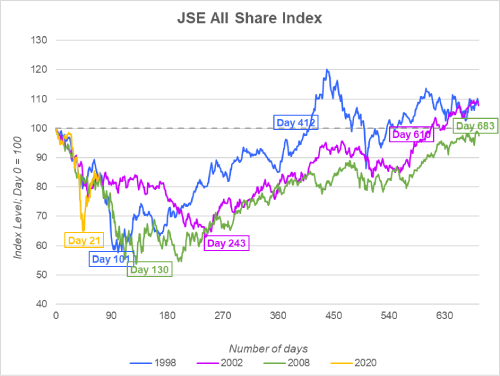 The current bear market cycle started on 17 January this year, but markets only started to decline substantially in mid-February.

At the time, South Africa did not have a single positive corona virus case and cases were mainly limited to China, with a few cases in the rest of the world.

Things took a turn for the worst on 6 March, and by 19 March our market has declined with roughly 35%. Take note that at this stage, similar declines were recorded on most indices around the world.

At the same time, markets in Brazil, Italy, Britain and Germany were already down by 40%. Compared to the previous three crashes, this was by far the fastest 30% drop since its peak (as the accompanying chart clearly shows).

Since then, the market has also recovered much faster (see the orange line on the chart) than any previous time, but it was still about 20% below its peak on 17 January this year and therefore technically still in a bear market.

What is an investor supposed to do?

What is going to happen in the next month, two months or even one year and how important is it for the decisions you are about to make considering the lingering uncertainty?

Let me start by saying that the current conditions are different from all previous periods and trying to predict what the market recovery is going to look like, is basically impossible.

Therefore, we must rather focus on what we know from experience and analysis.

On a daily basis, we receive questions such as:

“Should I not park my investments in cash until things return to normal and invest afterwards?”

It sounds like a good idea, but it is near impossible to do in practice.

When do you sell? When the market is down by 10%? Surely not, seeing that 10% declines happen often and that would mean that you must continuously enter and exit the market.

Do you sell with a 20% decline, which is technically a bear market? If you do so, you will bank what we refer to as a paper loss (if you talk about the markets in a broad sense) and you therefore immediately put yourself under pressure to get the timing of getting back into the market spot on.

And if you think it is easy to identify turning points, think again. On the way down, markets often have 10% or more upward rallies.

Responding reactively to the market in this way is similar to a cat on a hot tin roof. You are likely to permanently destroy capital in this way.

It is like attempting to escape from a rolling car.  Sometimes, someone is lucky enough to escape unharmed, and there will be people who try this trick of timing the market and, thanks to luck, manage to succeed, but the vast majority will see a bad outcome.

During a market like this, the best thing to do is to do nothing at all.

The fact that the market is offering 30% less for your assets, does not mean you are obligated to accept the offer.

“Should I not move my total portfolio to offshore assets, seeing that the JSE has not been performing well and that my offshore assets perform much better in rand terms?”

You should definitely have an exposure to offshore assets, but commentators who tell you to move all your assets offshore, especially given the current exchange rate, are just plain reckless.

See the chart below concerning the rand-dollar-exchange rate since 1993. The orange bars illustrate when the dollar has strengthened with more than 30% against the rand in a calendar year.

The dollar has subsequently weakened with more than 20% per annum against the rand for two of the previous three periods to counter the overreaction.

At the same time, a group of 85 companies on the JSE, currently trade at a price-to-book ratio of 1.4, which is 50% lower than the ten-year average and is in line with the lowest points in 1998, according to Denker Capital.

In a world of uncertainty, where the price that you currently pay is the best indicator of future returns, I would want a significant exposure to a portfolio of companies that trade at a discount of between 30% and 50% (the JSE) and possibly start to reduce exposure to companies that aren’t trading at a discount and where there is a possible 20% to 30% premium to the exchange rate (specifically the US).

“Is it a good time to invest, given that the market has declined significantly?”

It is never a bad idea to buy assets at a discount.

Personally, I believe the steps taken to combat Covid-19 will not lead to the next great depression.

The growth in population will still be positive this year and the deaths caused by Covid-19 will most probably be a fraction of what the earlier models have predicted.

In my opinion, if you are in the fortunate position to have cash lying around that you will not need access to in the next few years, and if you accept that after you have invested the money your investment could fall by a further 20%, current valuations offer a good entry point.

I wouldn’t go so far as to borrow money to invest at these levels.

Currently there are a lot of disruptions in the markets, of which oil prices and the rand-dollar exchange rate are only a few.

Any changes that you want to make to your current portfolios, will need to be done with major caution.

Andró Griessel is a certified financial planner and managing director of ProVerte Wealth and Risk Management. Contact him at info@proverte.co.za.