Be wary of partial truths

Be wary of partial truths

In times of extreme uncertainty, many of us are likely to be more susceptible to being influenced and will blindly follow the opinions or advice of experts without the necessary dose of scepticism.

It therefore worries me when I see an article with a headline that reads “JSE is one of the worst in the world”, because such a headline can be misleading on face value when not viewed in context. This can be detrimental to decision making.

The next phrase then follows in this promotional article: “Ten years later and the Cinderella story has ended, with the JSE being one of the worst stock markets in the world in rand terms, over a five- and 10-year period, negative returns abound”.

Allow me the opportunity to elaborate on these statements:

In the table below we list 17 countries (ten emerging and seven developed) and their stock markets in their base currency over the preceding decade. For ease of reference the ten largest emerging countries were used as well as the seven most popular emigration destinations for South Africans (not surprisingly, all developed countries). Viewed within this list, South Africa came in third (out of 17) given their nominal returns, fifth after adjusting for inflation and second best out of the emerging countries. 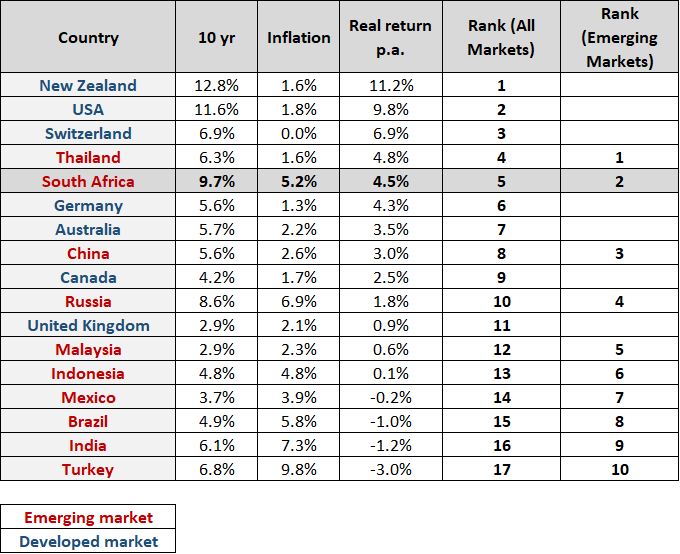 According to my data South Africa returned a mere 0.43% per annum in dollar terms. This still places us fifth on the emerging countries list. Thailand fared the best with a return of 6.38% per annum and Brazil the worst with -6.61% per annum. However, over the last five years, 65% of the mentioned countries (Australia, United Kingdom, Germany and Canada included) delivered negative returns in dollar terms.

The following is important:

When the commentator in the above-mentioned article refer to the poor returns of the JSE, it is done so with this graph in mind. Over and above the points already mentioned, the following is also important:

Markets, and often the rotation between developed and emerging markets are cyclical and to extrapolate over- or underperformance into perpetuity is simply not wise.

For context, please view the graph of the decade preceding the last one. The roles were completely reversed. In my view a repeat of this is more likely to play out. 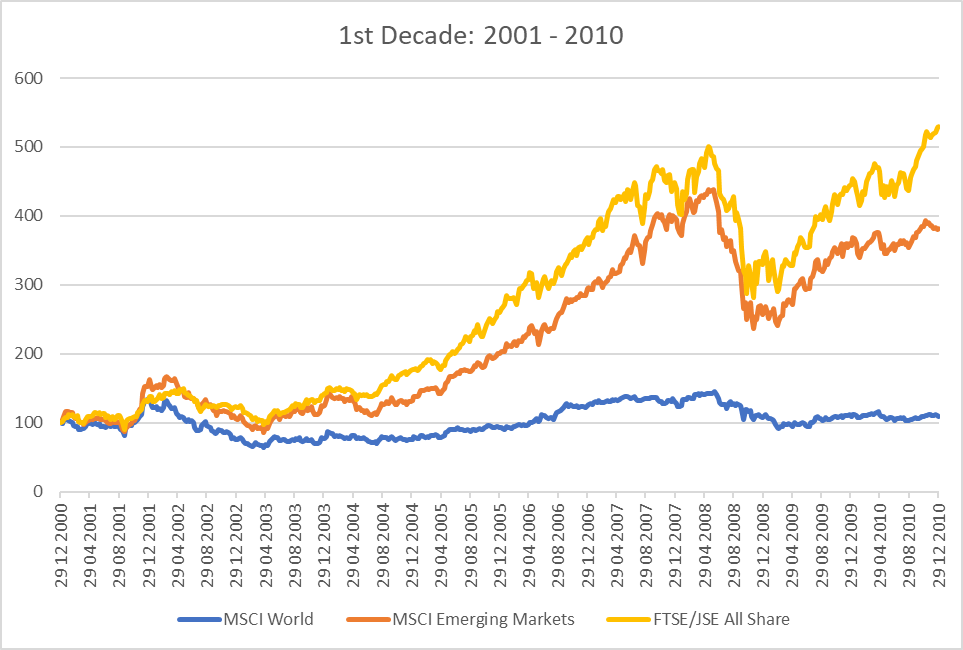 A more trustworthy indicator of wealth creation or destruction is what your return was after local inflation (the real return in your country).

If the currency of your country were to devaluate permanently, then your inflation rate would skyrocket.

Specifically the exclusion of small minority groups for emergency relief from government in the midst of the lockdown, is a significant outcry. This reality has definite implications for how you are going to allocate your capital (working- as well as accumulated wealth) and also the way in which you are going to think about the liquidity thereof.

To simply run after the perceived safety net of the dollar and the US stock market that are both trading at significant premiums, does not seem to be the logical answer.

You simply cannot protect your wealth by buying overpriced assets at a currency premium.