Why you should ignore a decade of returns

A few years ago, a friend convinced me to join them on the Karoo to Coast mountain bike challenge. You are fit enough, they said. It is mostly downhill, they said. It will be fun, they said.

A few months before the start of the race I started gathering my troops, but as we got closer to the race the excuses escalated until finally, on race day, I alone showed up for the “team”. Armed with my bicycle that dated from the 1990’s and seemingly made with the same metal that church bells are made of, complete with brake pads that connects to the outer rim (which I later found out pressed against the wheel during the entire race) I decided to take on the challenge.

Long story short, I finished 8 hours later with an average heartrate of 180 bpm, an aching behind and visions of people who have long since died.

Performance, or sometimes simply the ability to finish what you have set out to do, takes a lot of blood, sweat and tears.

I’m therefore astounded to think that investors expect that exceptional long-term performance is possible without having to endure extended periods of under performance.

The tendency to chase the rainbow (the equivalent of riding downhill only) is deeply rooted in our psyche and I want to argue that we are in a period where investors have recently signed up for an offshore investment race with stars in their eyes and a belief that this is going to be one long downhill race to the pot of gold at the end of the rainbow.

Where does this perception come from?

If the road from Uniondale to Knysna is downhill, does it matter how steep the hills are in between and whether you are fit enough for the whole journey?

Of course it does!

When you are therefore a long-term investor and intend to invest during the whole cycle of the market it is important to have a complete picture of what you can expect from start to finish.

So why am I sceptical that investors who invested offshore NOW will not have the ride that they think they signed up for?

See the graph below that shows the performance of the S&P 500 for the last 25 years, and note the following: 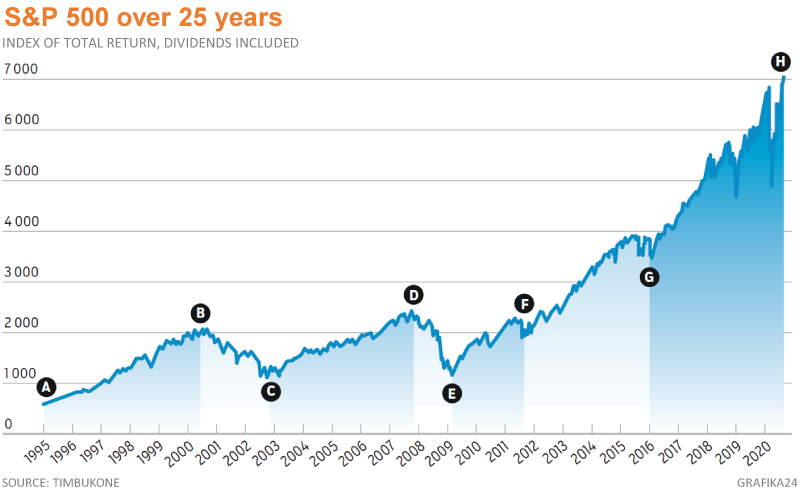 Everything that I (and you for that matter) have read in the media over the past few months, making the argument FOR offshore investments, referred to the period between point A and point H and between E and H and created the perception that these returns were generated in a straight line.

It is therefore also important to take note of the periods from B to C and D to E and more specifically from B to F because, mark my words, this kind of (lack of) returns are definitely going to be part of your investments experience at some point.

Take the amount that you currently have offshore or intend to invest offshore and apply it to the numbers below, then decide for yourself if you would be able to continue to paddle with the same determination if you end up in these turbulent waters.

My conclusions regarding the above observations are as follows: